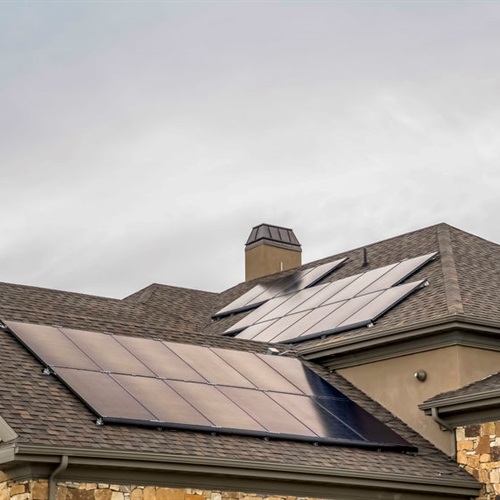 When considering whether or not to look into the potentially enormous benefits of solar power, many people throughout the United States outright reject the idea. “My state gets no sun three months out of the year”, they object. In the mind of many, such objections are grounds for dismissing off hand the idea of even looking into solar power.

With modern solar panels, a cloudy location is far from being a deal-breaker.

It turns out that the full picture is considerably more complex. Solar technology has come a long way in the last 30 years. And newer, better materials as well as highly efficient designs, like panels with back mirrors that allow uncaptured photons to pass through the cell a second time, have dramatically improved the efficiency of these standalone home power stations.
This means that modern solar panels are often capable of retaining a large portion of the sun’s potential energy even on cloudy days. And for anyone who has received a nasty sunburn while skiing in the Rocky Mountains or boating on the open water on cloud-covered days, this should come as no surprise. Much of the sun’s radiation easily penetrates even moderate to heavy overcast. Modern panels have no difficulty making use of this cloud-penetrating radiation, retaining as much as 85 percent of their energy production even on days with total cloud cover.

When it comes to solar power, asking the right questions is imperative.

That brings us to the real question that anyone who is considering solar power as a practical means of reducing their electric bill should be asking: Given the cost of electricity in any given state, will solar power offer significant net savings on one’s power bill? As it stands, electricity generation is so expensive in many East Coast states that even given the low amount of sunlight that many of those states experience, the installation of even complex solar systems will pay for themselves inside of the first year or two. For instance, at $.19 per kilowatt-hour, the state of New York has some of the highest electricity costs in the country. Even given its frequent cloud cover, New York residents stand to achieve some of the highest cost savings in the country by installing solar power for their homes. Other cloudy states where residents can save huge by going with solar power include New Hampshire, Connecticut, and Alaska.

Solar power may ultimately save you and your loved ones’ lives.

When it comes to solar power, however, the most compelling reason to strongly consider installing a modern system is for redundancy. The simple fact is that the modern electric grid is shockingly vulnerable. An electromagnetic pulse, a local natural disaster or civil unrest could each put the lights out for months or even for good throughout most of the United States. Having residential solar power equipment means not only the ability to use creature comforts during a civic collapse but also the ability to maintain stores of frozen and refrigerated food, an ability that could quickly become a matter of life or death in a protracted grid-down scenario. Even if such circumstances have a very low probability of developing, the consequences of having no electricity for months on end would be so severe for most Americans that having a solar-powered backup plan is always the right choice. The fact that it is likely to save hundreds of dollars a year in electricity costs is just an added bonus.