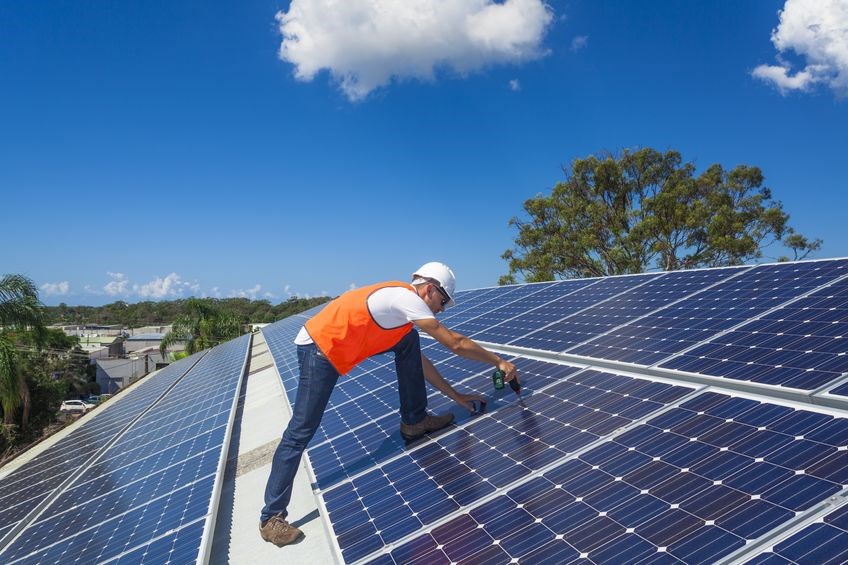 Duke Energy Corp.’s rebate program helped double the amount of rooftop residential solar installed annually in North Carolina and may be the most successful part of a broad renewables bill adopted by legislators in 2017.

“The goal was to boost residential and commercial solar in the state and, boy, did it work,” says Stacy Phillips, Duke Energy manager for the regulated distributed energy technology program.

Charlotte-based Duke (NYSE: DUK) notes it is still seeing rooftop solar added by customers who do not get the rebate. The company says this is due to increased awareness of the availability of residential and commercial solar as a result of the rebate program, which has operated since July of 2018.

But the rapid pace rebates are being snapped up as they are offered each year is also causing a boom-and-bust cycle for solar installers. That could get in the way of establishing the kind of traction for the industry legislators hoped for.

Renu Energy Solutions employs 48 people, most of them at its headquarters in Charlotte. President and founder Jay Radcliffe prefers to keep his installation teams in house, rather than using contractors.

He says the rebates have increased awareness and led to a lot of new business. But the rebate cycle has compressed much of his business into just a few months of the year. And it can be hard to meet the high demand and then keep people employed when business slows.

“We feel like we are in high-growth mode, in staff and in markets,” he says. “But the cycle makes you give it a second think.”

Jeff Redwine, founder of Renewable Energy Design Group, based in Winston-Salem, says the rebates are a great incentive. But they have also created a lot of confusion about availability. Both on the first round of rebates last year and the second round awarded Jan. 2 of this year, the rebates for residential customers were all essentially claimed in the first few minutes after Duke’s utilities opened the application process. The rebates for commercial customers were also quickly snapped up and the rebates tapped out.

“I feel like the rebates are not hurting the industry by any means,” he says. “But it is hard to tell how much it is helping.”

Radcliffe reports he began submitting applications for his customers immediately when the online process opened at 9 a.m. He had applications accepted through 9:03 a.m. By 9:04 his next applicant was put on the waiting list.

Redwine’s operation is smaller than Radcliffe’s — just nine full-time employees. The way the program is set up, projects started in October can qualify for rebates awarded in January.

That creates a lot of business from October to about March. But it is difficult to keep the company sized right for that kind of schedule.

Phillips points out experience shows a number of the customers on the waiting list are eventually awarded rebates as some of the initial projects drop off. The rebates Duke offers are based on the size of the project and can defray up to 25% of the costs. The utilities offer a maximum of $6,000 for residential projects up to 10 kilowatts in size, with the rebates totaling 60 cents per watt. Commercial customers get a slightly lower rebate of 50 cents per watt, but because qualifying projects in that category can be as large as 100 kilowatts, the maximum rebate is $50,000.

Churches and other nonprofits get a rate of 75 cents per watt, again for projects as large as 100 kilowatts. So, their maximum rebate is $75,000.

Duke expects to offer about $12 million in rebates annually through 2023.

The results have been impressive.

The N.C. Sustainable Energy Association calculates that 2,465 residential rooftop solar projects, totaling almost 18 megawatts of capacity, were installed in 2018, after the first round of rebates. That was up from 1,130 residential rooftop projects installed the year before. According to estimates based on Duke’s figures for the 2018 rebates — the first round awarded by Duke — its rebate program would have accounted for more than 1,300 of the projects installed last year. And more than 450 projects that received rebates in 2018 were still slated to be installed by year end.

The state has historically lagged in residential- and commercial-scale solar projects despite its success in developing utility-scale solar. The Solar Energies Industry Association ranks North Carolina second in the nation for the amount of solar on its grid with 5,216 megawatts installed as of the end of 2018.

The same organization ranks the state 21st for residential solar with 64.6 megawatts total at the end of 2018. That is well behind South Carolina, which has half of North Carolina’s population, but ranks 15th in the nation with 151.6 megawatts of residential rooftop capacity.

The state does a little better with commercial rooftop solar, ranking 13th with 122.4 megawatts of capacity. But much of that was built before 2015, when North Carolina offered a generous 35% tax credit on the installation costs of solar projects.

Thad Culley, who covers the Carolinas and Virginia for the pro-renewable organization Vote Solar, using federal solar data and census figures, estimates the adoption rate for solar in South Carolina is about four times what is in North Carolina.

He says South Carolina has provided more long-term certainty on the return customers can expect from solar installations. And the Energy Freedom Act the S.C. legislature passed this year builds on that. For example, it says customers who install rooftop solar between now and 2021 are guaranteed to get paid as much for power they sell to their local utility as the utility charges them for power through 2029.

And less stringent leasing restrictions in South Carolina have attracted big national companies that offer leasing options to residential customers, he says. North Carolina has attracted no such national players.

Duke Energy’s Phillips says that has been disappointing.

“I thought we would have seen more activity from the lessors than we have seen in play,” she says. “I think that is simply market forces at work and the big companies must have decided that the market conditions in North Carolina aren’t as favorable as in South Carolina.

Maggie Clark at the Solar Energies Industry Association says rates are higher on average in South Carolina. And that does make the economic proposition for solar better there. But, she says, there are other important differences; chief among them is additional fees that can be charged to customers with solar installations in North Carolina that reduce the attractiveness of such investments.

The installers and solar advocates have proposed a remedy for the rush for rebates. They have gotten legislation introduced that would cut the size of the rebate in half but double the amount projects that could qualify. The size of projects that qualify would be the same. Duke would invest the same amount of money, but the rebates would not be so scarce and could attract more people.

Radcliffe says House Bill 889 was introduced early in the legislative session. Duke did not back the bill, however, and it got no traction.

Because the parameters of the rebates are specifically set by the legislation, and not be the N.C. Utilities Commission, it cannot be altered by regulators without action by the General Assembly.

Phillips says Duke is open to changes that help advance solar in the state. But, she says, the company tries to take a holistic approach rather than taking on individual issues. “The thing that the installers would like to see change is extending the program somehow. But we are satisfied with the program. We are seeing great customer approval of the rebates.”

Do programs from 2017 N.C. renewables law measure up?
The N.C. solar rebate programs for Duke Energy Carolinas and Duke Energy Progress were mandated by the N.C. General Assembly as part of the Competitive Energy Solutions for North Carolina Act in 2017.

The act addressed a number of issues for renewable energy projects, which in North Carolina remain largely solar projects. The rebates, particularly for residential and commercial customers, have been the most popular of the programs to come out of the legislation. Here is a quick report card on the other main programs.

• Competitive bidding for new solar construction. The first tranche of bids were awarded by the utilities in May. Duke Carolinas chose 515 megawatts worth of capacity in 12 projects for long-term power purchase contracts. That was a little less than the 600-megawatt target. Duke Progress was awarded 87 megawatts of capacity in two projects, a bit more than its 80-megawatt target. Those contracts are being negotiated now and will be awarded by July 8. The N.C. Utilities Commission has delayed the second tranche of bids, originally slated for July, as it works out some remaining issues about how the first round of bidding worked.

• The Green Source Advantage Program. The legislation expanded a pilot program Duke Carolinas had operated to match large industrial and commercial customers solar and other renewable energy producers for clean energy available at a premium rate. The program has been substantially approved. But some details remain to be settled. Duke says it has a number of interested customers, but no contracts have been signed yet.

• Solar leasing. The law allows a limited amount of projects built by installers and leased to customers. This lets a customer get some of the benefits of solar without the upfront cost of building the project. To date only two companies, Duke itself, focusing on commercial customers, and Eagle Solar & Light of Alabama, focusing on nonprofit customers, have been approved by regulators to offer the leasing option. Eagle started work this week on its first lease project and says it has more on tap. Duke says it’s talking to customers but has no projects yet. No company is offering leases for residential customers.

Read the original article on bizjournals.com by clicking here.